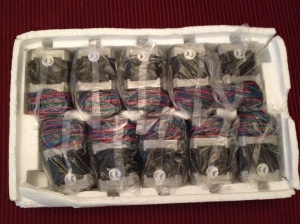 Our friend the post person has been again with a weighty box of joy!

These stepper motors are type SY42STH47-1684A so there’s plenty of power to spare.

They also come with a flat part on the drive shaft and a REALLY long cable.  There are plenty of cheaper motors that have a round shaft and / or short cables.

Time to bolt these on to the frame and double its weight. 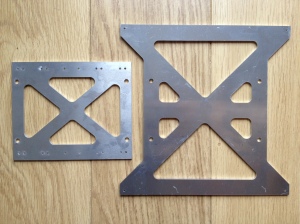 In an attempt to keep the overall quality of the printer up and to satisfy my lust for shiny things I decided to go for laser cut parts for the printer bed.  Could I have used cheaper printed parts? Yes, would they look as cool? NO! 😉

The smaller piece is mounted to the Y-axis rods and the larger piece holds the heated bed. 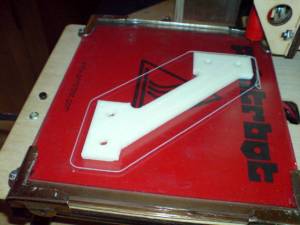 The printer prints a printer

This build was kickstarted (pun intended) by my fathers purchase of a Printrbot.  With his printer I am able to print parts for my MendelMax (hence the whole “replicating” part of the RepRap philosophy).

A few of the parts needed tweaking due to some different bolt sizes (M6 instead of M5 for the tapped ends of the extrusion).  This leads to being thrown in the deep end with programs like SketchUp, OpenSCAD, NetFabb and ReplicatorG.

With SketchUp STL files don’t come supported as standard and you need to install some extensions to allow you to import and export STLs.

Where SketchUp is a great visual CAD program where you can drag surfaces around with your mouse OpenSCAD is purely code based.  This leads to (depending on the code) a more simple and accurate control over geometric shapes and patterns.

After creating or tweaking STLs in SketchUp I’ve found the “Center” and “Put on platform” functions quite useful for aligning up your objects reading for printing.

Also, after some failed prints I started using the free / basic version of NetFabb as this program has a “Repair” feature which repairs any non manifold parts (breaks in geometry) which would cause issues with Slic3r which we were using to print the parts.  So in total this lead to a SketchUp -> ReplicatorG -> NetFabb -> Print work flow. 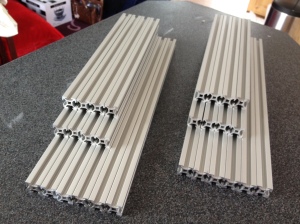 Order parts and they arrive (some time later)!

It’s exciting to get the ball rolling although I know there’s a lot more work to be done.

The first parts to order / receive are the aluminium extrusion which bolts together with the aid of printed parts to make the frame of the MendelMax.

A few pieces need to be drilled and tapped.

A key companion part to the extrusion are T-Nuts.  These are nuts that slide in to the extrusion so you can bolt things to the side of it.  In the UK the most available T-Nuts are quite expensive ball-bearing / spring loaded affairs which are quite over the top.  More simple / cheaper T-Nuts are available but not so convenient to purchase.